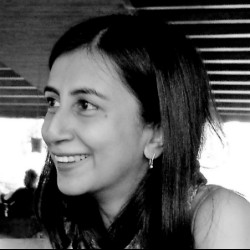 Anjum Hasan is the author of the novels The Cosmopolitans, Neti, Neti and Lunatic in my Head, and the short story collections A Day in the Life and Difficult Pleasures. She has also published a book of poems called Street on the Hill.

Her books have been nominated for various awards including the Man Asian Literary Prize, the DSC Prize for South Asian Literature, the Hindu Best Fiction Award and the Crossword Fiction Award. She was the Charles Wallace Writer-in-Residence at the University of Canterbury.

Her short stories, essays and poems are widely published including in Granta, Baffler, Five Dials, Wasafiri, Drawbridge, Los Angeles Review of Books, Asia Literary Review, Caravan and anthologies such as A Clutch of Indian Masterpieces: Extraordinary Short Stories from the 19th Century to the Present and The Bloodaxe Book of Contemporary Indian Poets.

Anjum is books editor at The Caravan. She lives in Bangalore.