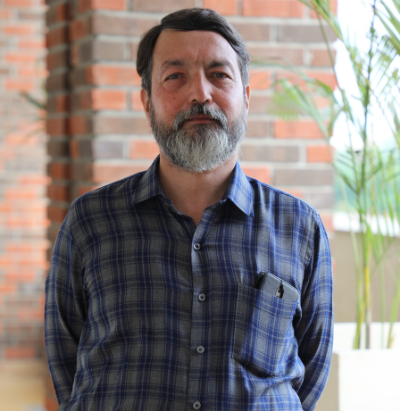 Dr. Ashutosh Dayal Mathur is an Associate Professor in Sanskrit and Head of the department of Sanskrit at St. Stephen’s College, Delhi, where he has been teaching since 1981. In his long tenure there, he has taught kavya, darshana, dharma Shastra and other subjects to undergraduates.

He has been associated with the Department of Sanskrit, University of Delhi as a research supervisor for Ph.D. scholars, seven of whom have been awarded their Ph.Ds and six are currently working under him on various topics in darshana and dharma Shastra. He has also been a member of the syllabus committee, courses committee, departmental research committee, paper setter and examiners of the Department of Sanskrit, Delhi University.

Dr. Mathur also conducts special programmes for teaching Sanskrit to scholars across disciplines at St. Stephen’s School for Languages. He has created customized modules for foreigners interested in learning Sanskrit.

He was invited as visiting faculty at the School of Historical Studies, JNU for the year 2015-16 and at Delhi School of Journalism, University of Delhi for 2018-19.

His primary interest is in Hindu law as depicted in ancient and medieval Sanskrit texts. For his Ph.D. from the University of Delhi, he chose to explore the changes in Hindu law from ancient to medieval texts.

His book titled ‘Medieval Hindu Law’ has been published by the Oxford University Press, New Delhi. He has presented several papers on various aspects of Hindu law at seminars and conferences.

Dr. Mathur loves to dabble in writing Sanskrit stories and poems, largely for his students.