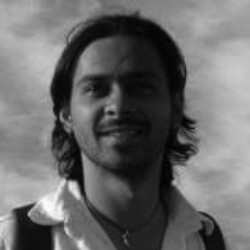 Varun graduated with a Masters in Visual Culture; studying language, critical theory, culture, visual media, art history and psychoanalysis. He has been involved in various documentary, fiction and art projects over the last fifteen years in different capacities; illustrating, writing, directing, creating music for film, and consulting on scripts. Most recently, Varun shot for a German producer in Sierra Leone, Ghana, Germany and Austria, and attended an art residency at the Luminato Festival in Toronto. He has worked with local urban and rural communities in multiple states in India for various film and cultural projects. Currently he is working on a feature length documentary film as its writer and director. The film deals with the human condition at large, its relationship with the planet, seen through vignettes which will be shot in diverse parts of the world covering a vast array of human endeavour. It aims to discuss the position and impact of an individual in global culture. Along with the film, Varun has developed a program for workshops in school also ong the same central themes as the film, and is currently developing an App for the same.

In the past, has held one-to-one film making workshops for enthusiasts, and has trained and aided multiple interns who have worked at Spotfilms, a Film and TV News Agency, and the Foundation For Responsible Media, which works in the development sector and media, information and literacy.

He is appointed as director for Steps India Pvt Ltd, which is a dedicated documentary production agency, and a subsidiary of Steps International. He is also a trustee of the Foundation For Responsible Media.

He has recently started his own company, VITRIOL LLP, for the purpose of producing long format knowledge based documentaries, and experimental fiction films. The company is currently looking for investors to develop projects like the workshop program for schools mentioned above, and a series of 5 films on Indian Philosophy and Consumer Culture.