Ashoka plays host to a journalist, teacher, writer and crusader at heart

Prof Vaiju Naravane, who recently joined as Professor of the Practice of Journalism, has high expectations of Ashoka, her students and herself. 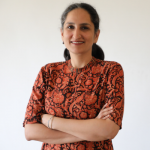 If you were to walk down the halls of Ashoka University these days, you may come across a petite figure with short-cropped hair leaning against a doorjamb, deep in conversation. Depending on who she is talking to, the conversation could be taking place in Urdu, Hindi, Marathi, French, Italian – or English, of course. That is how you would know that you are looking at journalist, writer, editor and now Professor of the Practice of Journalism and Media Studies at Ashoka, Vaiju Naravane.

When it comes to the ‘practice of journalism’, Prof. Naravane doesn’t just talk the talk; she has walked the walk. After obtaining degrees in the Humanities and Journalism from Pune University, she spent a year travelling and writing in USA as a Fellow of the World Press Institute. For the past three decades she has held senior positions covering Europe, notably for The Times of India, Radio France Internationale, AITV and The Hindu. She also became a commentator of sorts on India for the Belgians, Swiss – even once Radio Algeria – and other Francophone nations. She commentated in Indian languages for the BBC from Paris, once doing a 10-hour session on the Charlie Hebdo case for them in Hindi, Marathi, Urdu and English. Naravane was the Director of Information of the Geneva-based World Health Organisation and is Foreign Fiction Editor at Albin Michel in Paris. As if all this were not enough, she is currently working on her second novel.

She has taught at Sciences-Po, both in Paris and Le Havre, and now finds herself back home in India. So what made her choose Ashoka? “I wanted to go to a place that was special and would allow me to function the way I wanted to; Ashoka was the only place I could think of. For instance, if I look at my course, it includes how the media covers issues like rural affairs and the environment, sensitivity to gender and sexuality, and ethics, among other topics.”

She is also excited about the fact that she can design and execute her course in any way she wants to. Students can expect to spend time in the classroom one day, film and edit on another, and spend time with eminent guests on a third. “One of my guest speakers is going to be someone like Sanjoy Ghosh, the well-known lawyer. He is coming to talk to the students about slander and even criminal defamation. India remains one of the few democracies where criminal defamation is used to cower people and also used by the State to curb dissent. So it’s good that I can deal with issues like these over here”, she says.

To listen to her talk it is obvious that Naravane comes from the school of journalism where common cause and the greater good take precedence over simply ‘coverage’ of a story. She does not believe that a story is complete just because two sides of a problem have been represented and quotes acquired from both parties. These are some of the issues she engages with in class as well –‘When does one give up on journalistic objectivity and take a stand? At what point does simple reportage become a campaign?’ It is clear that despite her claims to the contrary, she is a bit of a crusader at heart.

So how does she tell her students to navigate these tricky waters? “By telling them to ask themselves whether the story is in the public interest. Once you keep that at the front of your mind, the story will follow. I also tell them to do the homework and understand the story themselves before they start reporting it. For instance, how can you do a story on the Municipal Corporation if you don’t understand the bylaws that govern it?” she says.

It is clear that the incipient journalists at Ashoka find themselves with a teacher more than capable of leading them through this unique and demanding course. As for Prof. Naravane herself, she is not quite clear on where her road will take her next. After all, she could do works on one of eight different projects – work on her second novel, teach another course, keep up with her editing work and, as always, write her stories. Because, as she puts it, “You can’t teach unless you are involved in the outside world as well.”

(The writer is Director, Communication and Media Relations at Ashoka University.)