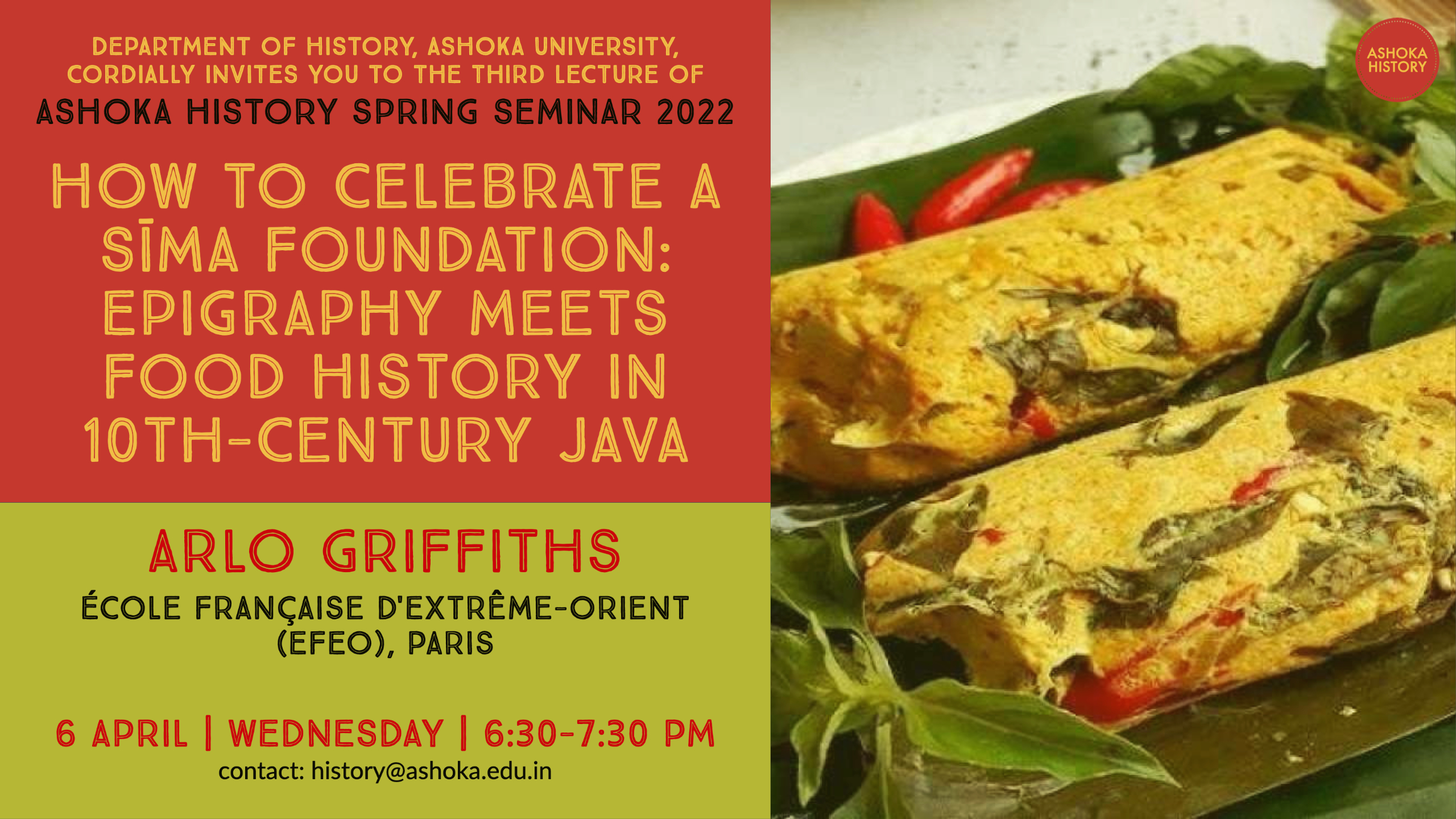 We are delighted to invite you to the third lecture in the Ashoka History Spring Seminar 2022. Arlo Griffiths will be delivering a lecture titled ‘How to Celebrate a Sīma Foundation: Epigraphy meets Food History in 10th-century Java’.
Here are the details:
Date: Wednesday 06 April
Time: 6.30-7.30PM(IST)
Zoom link: https://zoom.us/j/91948028272?pwd=TE9WaDFNTy9ma0RTWjFzZWVuKzlwdz09

This lecture will take an audience presumed mainly to be familiar with the history and cuisines of India to the far eastern reaches of the ‘Indianized’ world, that is to the island of Java, famous as a melting pot of indigenous with external cultural influences, not least of which Chinese and Indian. We will focus on the 10th century, more particularly on the inscriptions, which are virtually the only kind of source material for this period. But we will start with a bird’s eye view of food items typically consumed in Indonesia today to begin to envisage the pathways and timeframes of culinary diffusion. We will next take a brief look at the inscriptions, their material appearance, their archaeological contexts and geographic distribution, the nature of their contents, the state of the art — and challenges to be overcome — in their study as texts and their use for writing history. All these texts are concerned with the foundation of tax-exempt estates referred to by the word sīma, borrowed from Sanskrit though its meaning has shifted in Old Javanese to designate not only the boundaries but also the territory delimited by them. A typical inscription ends with a description of the ritual celebration of a sīma foundation, and it is in such descriptions of ritual feasts that we find data that are relevant to food history. I will sketch the outlines of the feast, as they can be inferred from the epigraphic sources, and will then focus on a few items of food and drink that have emerged in recent years as the inscriptions have come under more intensive study. Among the items of early Javanese ‘fusion cuisine’ to be discussed are the words tahu (soybean cake, of Chinese origin), kurima (perhaps from Persian ḵẖurmā, perhaps designating a kind of fruit), and suṇḍa (liquor, from Sanskrit śuṇḍā).

Arlo Griffiths is Professor of Southeast Asian History, École française d’Extrême-Orient (EFEO), Paris. Earlier, he worked as an Associate Professor of Indian Religions at the University of Groningen and held the Sanskrit Chair and Professorship at Leiden University. He is trained in Indology (with a focus on Sanskrit) at the universities of Leiden and Harvard. His doctoral research focussed on the Paippalāda tradition of the Atharvaveda. He has also worked on non-Brahmanical traditions in the domain of descriptive linguistics of the tribal languages of Orissa, particularly in the ‘Munda’ branch of the Austroasiatic family. In addition to his continuing interest in Indology and Vedic studies, his latest research has been on Southeast Asia by exploring the epigraphical documents in Sanskrit and the Austroasiatic and Austronesian languages. He now prioritizes publishing several unstudied manuscripts and epigraphical documents, in the form of critical editions, and their exploitation from the historical point of view. His many publications straddle these various areas of study and he is currently one of the principal investigators of the DHARMA project which looks at the Domestication of Hindu Asceticism and the Religious Making of South and Southeast Asia, financed on the European Research Council’s Synergy Grant.