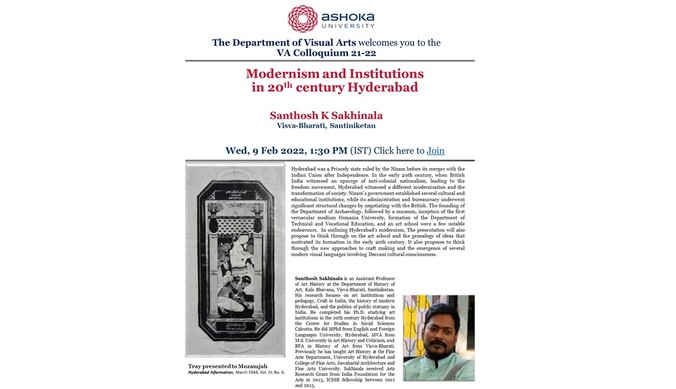 Hyderabad was a Princely state ruled by the Nizam before its merger with the Indian Union after Independence. In the early 20th century, when British India witnessed an upsurge of anti-colonial nationalism, leading to the freedom movement, Hyderabad witnessed a different modernisation and the transformation of society. Nizam’s government established several cultural and educational institutions, while its administration and bureaucracy underwent significant structural changes by negotiating with the British. The founding of the Department of Archaeology, followed by a museum, inception of the first vernacular medium Osmania University, formation of the Department of Technical and Vocational Education, and an art school were a few notable endeavours.  In outlining Hyderabad’s modernism, The presentation will also propose to think through on the art school and the genealogy of ideas that motivated its formation in the early 20th century. It also proposes to think through the new approaches to craft making and the emergence of several modern visual languages involving Deccani cultural consciousness.

Santhosh Sakhinala is an Assistant Professor of Art History at the Department of History of Art, Kala Bhavana, Visva-Bharati, Santiniketan. His research focuses on art institutions and pedagogy, Craft in India, the history of modern Hyderabad, and the politics of public statuary in India. He completed his Ph.D. studying art institutions in the 20th century Hyderabad from the Centre for Studies in Social Sciences Calcutta. He did MPhil from English and Foreign Languages University, Hyderabad, MVA from M.S. University in Art History and Criticism, and BFA in History of Art from Visva-Bharati. Previously he has taught Art History at the Fine Arts Department, University of Hyderabad and College of Fine Arts, Jawaharlal Architecture and Fine Arts University. Sakhinala received Arts Research Grant from India Foundation for the Arts in 2015, ICSSR fellowship between 2012 and 2015.

The Department of Visual Arts