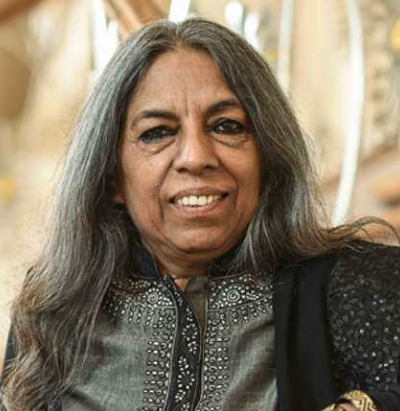 Urvashi Butalia (born 1952) is an Indian feminist and publisher. Along with Ritu Menon, she co-founded Kali for Women, India’s first exclusively feminist publishing house, in 1984. In 2003, following the closure of Kali for Women, she founded Zubaan Books.

Butalia started her career working with Oxford University Press in Delhi. She later worked for a year at their Oxford headquarters, before briefly to London-based Zed Books as an editor in 1982. She then returned to India and, along with Ritu Menon, set up a feminist publishing house, Kali for Women, in 1984.

Butalia’s main areas of interest are partition and oral histories from a feminist and left-wing perspective. She has written on gender, communalism, fundamentalism and media. Her writings have appeared in several newspapers and magazine publications including The Guardian, the New Internationalist, The Statesman, The Times of India, Outlook and India Today. She has been a regular columnist for the left-wing Tehelka and for Indian Printer and publisher, a B2B publication dealing with the print and publishing industry.

Butalia is a consultant for Oxfam India and she holds the position of Reader at the College of Vocational Studies at the University of Delhi.