World: A Home Ought to be for ALL

Reena Gupta, Director, Office of Learning Support at Ashoka University writes about how the Office is creating a more diverse and inclusive campus in line with Ashoka's vision and mission. 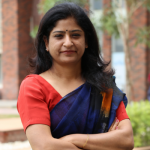 An idea conceived driving down the bumpy roads of Gurugram in June, actualised within a few days and delivered within weeks, garnered a lot of interest amongst the stakeholders. The College Readiness Program hosted by us recently received an overwhelming response. The importance of the terms ‘self-awareness’ and ‘self-advocacy’ for students with disabilities resonated with the audience, asking us to convert this programme into a nationwide movement, for that’s the aggression and approach it would need, to make this world more accepting of neurodiversity.

The word movement does bring back the memories from 2015 when I wanted to revolutionise the higher education system in our country by nudging it to open its doors to ‘all’ kinds of learners, ‘all’ kinds of minds. Wasn’t easy but I was prepared; it is never a smooth run for any underrepresented group. Somebody somewhere needed to believe in and walk this line of movement with me to make it happen.

July 2021, and the Office of Learning Support (OLS) completes 5 years at Ashoka University – a journey that started with a dream of a well-resourced world-class support system for students with invisible disabilities in a University in India. That sounds familiar. Yes, the Ashoka Founders too had envisioned a world-class liberal arts and sciences university in India years back. I must say that it has been a journey worth every effort, for the University overall, and the OLS.

Having worked with school students with dyslexia and other specific learning disabilities in India and the US, it always concerned me how these students had close to nothing when it came to extending the support they need in the higher education system in our country when in the US their transition was so seamlessly structured. Every University there has a Disability Services office mandated by the law, where these invisible disabilities are well-supported through resources made available at every step. This kind of a system had to start in India too and it did – in 2016 with the launch of OLS at Ashoka.

Today, students with different kinds of disabilities apply, the qualifying ones get their acceptance letters, become an integral part of the diversity at Ashoka, and contribute towards building a truly global university with its heart at the right place. Going beyond, this year we also became a valuable contributing member in the committee formed at the national level to frame a policy for the inclusion of students with specific learning disabilities in higher education.

From a simple start to support a particular group of students in the University, expanding it to all kinds of disabilities and learners, and playing a major part in policy formation for the Higher Education system of India – it’s surely been a ride to cherish.

With every year passing by, living the experiences of convincing and buying-ins, honing my skills of persistence, another truth gets unraveled. Students, the real stakeholders, continue to miss on a fulfilling and rewarding college and career opportunity because of their unpreparedness to advocate for themselves, demand for their right to accessible education, and take on the world independently. Here came the need to engender another movement and there I go, but this time I’m not alone. I have a juggernaut of my colleagues, students, and their families from the College Readiness Program, together contributing, in one way or the other, towards Ashoka’s mission of nurturing responsible leaders for India and the world – a home to ‘All’.

‘There is finally light at the end of the tunnel’