The workshop was modelled along the lines of Ashoka’s philosophy of writing that believes in the essentially conversational nature of academic writing. 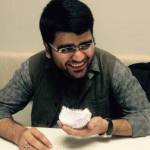 November, 2015: This semester, the Centre for Writing and Communication (CWC) collaborated with Ashoka University’s Outreach department to organise an inter-school essay competition for students of classes XI and XII in the NCR. Entries were invited in the form of 850-1,000 word essays in response to the prompt, “Blogs, Facebook, Twitter: Do social media offer new forms of interconnectedness and action, or have they alienated us from each other and the real world, transforming us into herd-like consumers of virtual reality?”

The CWC evaluated 60 entries and shortlisted 27 that reflected a compelling combination of creativity, critical thinking, logical presentation and lucid writing. The goal was not to find the perfect essay, but to spot potential, i.e., to find essays that included these features in a permutation that is of a standard we expect of our students at Ashoka University. Accordingly, the CWC chose not to rank winning entries; rather, it selected three essays that would be especially promising first drafts were the writers undergraduates at Ashoka.

All 27 shortlisted students, along with their parents and teachers, were invited to Ashoka on November 17, 2015 to experience the academic rigour of its liberal arts education. While Professor Kranti Saran offered a thought-provoking demo philosophy class, Ratna Menon, Associate Director, CWC conducted an hour-long workshop titled “How Effective is Your Essay?” on the fundamentals of critical writing.

The workshop was modelled along the lines of Ashoka’s philosophy of writing that believes in the essentially conversational nature of academic writing. The workshop outlined the principal distinctions between a descriptive and an analytical essay and between an opinion and argument, explaining that good academic writing engaged with multiple sources and provided evidence in support of its claims. Menon said, “An effective and elegant critical essay is inevitably logically argued, well-structured and clearly written”. She debunked the myth of objectivity and observed that a good argument is premised not just on a critical engagement with the arguments and counterarguments made by others in the conversation, but is also informed by self-reflexivity and interrogation of one’s own “subject position”. Using sample introductory, body and concluding paragraphs from the students’ competition entries and the works of writers like Malcom Gladwell and Zadie Smith who have also written about social media, Menon demonstrated how to construct a sound and persuasive academic essay.

After the larger workshop, students met with CWC tutors in smaller group sessions where they received individual feedback on their writing. According to Akshai Narain, Senior Manager, Outreach, “Many students said that the workshop was an eye-opener because the Board exam approach towards writing was formulaic and restrictive”. Some even expressed their desire to revise their essays keeping in mind the feedback that they had received from the CWC and wanted to email their second drafts to the CWC for further feedback.

The Ashoka Experiment: Setting the Benchmark for Sustainable Campuses

How 3CS Media Fellowship is supporting climate journalism from the margins