If Physics was the central science during the past century and Engineering in the century before that, “Biology,” contends Prof Gautam Menon, “is certainly going to rule the rest of the 21st Century.” 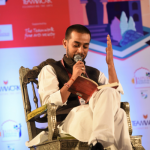 Among the most quoted Indian experts on the COVID-19 pandemic that brought the world to a grinding halt, Prof Menon says that he was “very lucky” to be guided by remarkable teachers who left a lasting impact on him.

His shift to thinking about how infectious diseases spread brought him to Ashoka University as a Professor of Physics and Biology in August 2019. This was four months before the pandemic broke out, but Prof. Menon had already decided that he wanted to devote more time towards understanding how India could better tackle public health questions, applying modern modeling methods.

“While I was trained as a physicist and later shifted to thinking about problems in biology, I realized that the problems that most interested me in public health also needed an understanding of the social sciences. To be able to build interdisciplinarity into the core of what I did as a scientist was something I thought I could do best at Ashoka University.”

By January 2020, Prof. Menon could sense that governments around the world were beginning to worry about the spread of a possible new pandemic disease. He had the advantage of looking at it from the eyes of somebody knowledgeable about the impact of SARS-CoV-1 in China, Singapore and Hong Kong.

Within a matter of days, he spoke about the potential impact of COVID-19 on India and the world, at an event in Hyderabad. This was as early as the 8th of February 2020, just a week after the first case was recorded in India, and was likely the first public talk about COVID-19 in India. There, he provided the larger context, describing how pandemics have changed the course of history in the past, but also going into the many other implications of a rapidly spreading infectious disease, for the economy and for society.

Very soon he was everywhere, being quoted on news broadcasts and cited on front pages of leading Indian newspapers.

“I came to Ashoka with the broad plan of beginning to think more deeply about models for disease spread and how I could contribute towards health policy using these methods. Then the pandemic happened.”

“I think Ashoka University, more than any other Indian institution might have, gave me the opportunity and freedom to think about these problems. Ashoka University did not restrict what I could think about or what I could do in any way. Why we were able to do so much in a short while is really a consequence of the fact that people trusted the work we were doing and they wanted independent voices to be heard,” says Prof Menon, who was earlier a Professor with the Theoretical Physics and Computational Biology groups at the Institute of Mathematical Sciences, Chennai.

He stresses the importance of “independent voices”, saying that governments take decisions and actions based on internal deliberations whose rationale is often not very clear to the public. Explaining, and in some cases challenging, these decisions on scientific grounds “was a role that I thought was important to fill”, he said.

“When you do write about issues that matter to the public, there will be people who will support you, as well as people who will assume that you have intentions that are political and not purely science-based. This is something that every scientist who has a public voice faces.”

“What I try to do is be as objective as possible. I’d like to ensure that the statements I make are not directed at a specific government’s actions but are what I would have liked to convey to any government.

“It is important to be perceived to have that objectivity so that people from all types of political backgrounds can take your scientific work seriously based on what you say. I am happy that the Ministry of Health and Family Welfare has featured some of what I have said on their website. A short Youtube video I made for them has been viewed close to a million times. This suggests that even though I have been critical of the government, my voice is taken seriously and it is understood that I am not blindly critical of the government but objective in what I say,” remarked Prof Menon, who studied at St. Stephens College, Delhi, IIT Kanpur, and the Indian Institute of Science, Bangalore, before working in Mumbai and Canada for several years.

Prof Menon has made key interventions through his lectures, op-eds and commentaries across the media spectrum while our world was ravaged by repeated spells of the pandemic. He advises a number of government agencies and states on their COVID-19 policy. In his work, he has used science and modeling to assess possible outcomes of specific government policies, addressing questions of whether a nationwide lockdown be imposed, how long schools should remain closed and of the right testing strategy.

His writings consistently underline the importance of understanding the nature of evidence. Evidence-based medicine, for example, is an approach to clinical practice where patients are treated based on the accumulated evidence in favor of specific interventions. “The ability to arrive at independent conclusions based on available evidence is common to both the sciences and the social sciences”, he remarks.

About the sciences at Ashoka University, he has this to say: “The syllabi at Ashoka University are comparable to anywhere in the world. What is particularly special here is our interdisciplinary approach”. He teaches two popular foundation courses, Principles of Science and Quantitative Reasoning, stating that he is often amazed with the level of intensity of his students.

He says, “We are all intuitively scientists. We look with a sense of wonder at the world around us, we naturally marvel at the stars and we look at living things with a certain degree of passion. We are born scientists and we actually have to beat science out of somebody if we want them to do other things.”

And finally, what makes him so confident of the fact that the rest of this century belongs to Biology?

“The problem of life itself: How can a set of atoms and molecules organize to form a complex structure that can grow, reproduce and purposefully alter its environment? This is a problem that the physical and chemical sciences have so far been unable to address. Where does our consciousness come from and how do our brains function? How can we cure diseases, including genetic disorders that we may be born with? How did life on earth start?”

“These are questions that lie at the unexplored frontiers of human knowledge.”

Pitfalls and pitstops of my well-being journey so far

Ashoka University appoints Prof. Sourav Pal as Professor and Head of the Department of Chemistry