On Not Mentioning the Modern

The 7th Symposium in the Literary Activism series 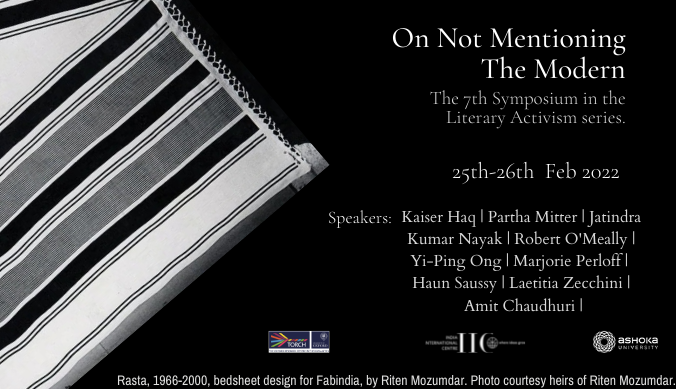 Presented by the Centre for Creative and the Critical, Ashoka University and literaryactivism.com, in partnership with The Oxford Research Centre for the Humanities (TORCH) and the India International Centre, Delhi.

As the mission statement says, one must wonder ‘why modernity, the modern, and modernism – terms that are by no means interchangeable, but which are related to each other – have largely vanished, in India, from critical discourse and the quest for self-knowledge. There’s not only a deep hostility to, and nervousness about, the modern; it has, in a sense, slipped out of language.’ This is true not only of India, but of other countries and contexts. They symposium hopes to generate a conversation about modernity and its elision.

It is open to all.

Kaiser Haq is Professor of English at the University of Liberal Arts Bangladesh. He is interested in writing poetry and non-fiction, and in literary translation. His books include Published in the Streets of Dhaka: Collected Poems and The Triumph of the Snake Goddess.

Partha Mitter is an author and art historian. He is Professor Emeritus at Sussex University. His books include Much Maligned Monsters: History of European Reactions to Indian Art (1977, 1992, 2013) and The Triumph of Modernism: India’s Artists and the Avant-Garde 1922-1947(2007). He was awarded an honorary D Litt from the Courtauld Institute, London

Jatindra Kumar Nayak retired as Professor of English, Utkal University, Odisha in 2016. He won the Hutch- Crossword Book Award in 2004. He has coedited Critical Discourse in Odia, which was published by Routledge in 2021.

Robert G. O’Meally is the Zora Neale Hurston Professor of English at Columbia University, where he has served on the faculty for thirty years. Director of Columbia’s Center for Jazz Studies, O’Meally is the author of The Craft of Ralph Ellison, Lady Day: The Many Faces of Billie Holiday, The Jazz Singers, and Romare Bearden: A Black Odyssey.

Marjorie Perloff is the Sadie D. Patek Professor of Humanities Emerita at Stanford University. She is the author of many books on 20th and 21st century Poetry and Poetics.  Her most recent book is Infrathin:An Experiment in Micropoetics (2021),and her edition/ translation of Wittgenstein’s Private Notebooks 1914-1916 is due out in April 2022.

Haun Saussy is University Professor at the University of Chicago, teaching in the department of East Asian Languages & Civilizations and in the Committee on Social Thought. His work attempts to bring the lessons of classical and modern rhetoric to bear on several periods, languages, disciplines and cultures. He is a former Guggenheim Fellow, a fellow of the American Academy in Berlin, and a member of the American Academy of Arts and Sciences.

Laetitia Zecchini is a research fellow at the CNRS in Paris, and visiting scholar at the Department of World Languages and Literatures at Boston University. She writes on contemporary Indian literature, especially poetry, postcolonial modernisms and the politics of literature.

Amit Chaudhuri is a writer and musician. He is Professor of Creative Writing and Director of the Centre for the Creative and the Critical, Ashoka University. He is editor of literaryactivism.com and conceptualises and curates the ‘literary activism’ symposia.

The Centre for the Creative and the Critical