The ideal co-curricular course is one in which every student, regardless of previous exposure, tastes the pleasures and difficulties of sculpting, designing, singing, dancing and acting within the vocabulary of a given art or language. 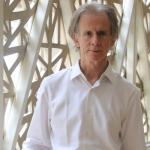 It all happened near the mess, beneath the giant mudras and not far from the Vitruvian man.  Lights sparkled.  Music rumbled.  To the north, film projections on the walls.  To the east,  poetry readings.  To the east, a  crafts bazaar. To the south, a Plautus comedy staged with abstract masks. Crowds of  performers mingled with throngs of attendees in two hours of choreographed bedlam. This was the last live co-curricular event before the pandemic hit.

As the Ashoka campus came to life in 2014, the first students, baffled and excited, came face to face with co-curricular courses, the brainchild of professors Madhavi Menon and Jonathan Gil Harris. The initial idea was to encourage  receptivity to the creative, thereby expanding a student’s gaze towards the wider world of knowledge. This intention still holds today. Back then there were just four courses  in art, music, theatre and dance. We now have 20 courses per semester  with a culminating event often referred to as the CC Mela and characterised by its creative use of the many indoor and outdoor spaces on campus for performances, baithaks and exhibitions.

So, come every Wednesday evening and  the campus receives 20-odd visitors, all practicing artists, performers and poets.  They animate a wide variety of courses that change with every new semester. The ideal co-curricular course is one in which every student, regardless of previous exposure, tastes the pleasures and difficulties of sculpting, designing, singing, dancing and acting within the vocabulary of a given art or language. A fine balance is attempted between skill and knowledge, all the while recognising the tentative nature of the enterprise.  A co-curricular professor has to facilitate experience while avoiding giving the students a false sense of too-easily acquired mastery.

Most courses have gone well (repeated in a later semester by popular demand). And some have not gone well, an occasional professor disappointing as well as an occasional student behaving badly! But by and large, most students-  some cheerful, some grumpy-  seem to finish by getting excited about the programme.

Because of the interactive nature of the courses, the pandemic-induced shift to online classes initially caused ominous uh-oh’s,  but  most of them have worked surprisingly well.  I was touched to see the students peering tentatively into the screen from their homes. On the ground, I and my associate Abhinaya Penneswaran have spent a lot of time organising materials-  special paper, brushes, clay, design tools, flutes, books, cloth, etc,-  and sending them to the students all over the country. Even the co-curricular mela has gone online three times now with professors and students creating online events to convey the essence of their courses.

And who are these wonderful professors?  They are photographers, designers, sculptors, painters, actors, directors, musicians, dancers, poets and more.  The initial class is never quite what they had expected (as I well know from the first time I taught here!), but they soon learn the ins and outs of the Ashoka prototype student and usually go on to a friendly semester of exciting exchanges with their pupils.

Painter Sheila Makhijani says, “I remember one student who said now he felt he could do anything in life. If painting can give that self-confidence, then that is amazing!”  Theatre director Neel Chaudhuri adds, “I’m always delighted to see how the creative unknown ruffles the students’ mundane regularities.”  Over to first batch student Apuroop Sethupathy, “The co-curriculars, while not always perfect, taught me to view art as a process that encourages questioning and discussion.”  And the final word is from recent graduate Sahana Hegde, who responds with a less-than-cryptic “Positive”!

From YIF to German Chancellor Fellowship: The journey of Ashoka alums Rituj Sahu and Venugopal Rajamani