The idea of sexual “shame” is relatively new in the Indian subcontinent, and we in fact have far longer and far older histories of what may now be termed “pride.” 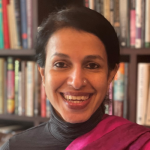 “Pride” is the term with which members of the LGBTQIA+ communities describe their defiance in the face of stigma and oppression. The term “pride” stands in direct opposition to the “shame” that is often associated with non-normative sexualities and disproportionately attached to those who do not subscribe to the template of heterosexuality and reproduction. “Pride” is a powerful counter to the shame of sex.

So far so good. As a symbolic term that allows people to emerge, if only briefly, from beneath the shadows of violence and fear, “pride” is an important tool in the arsenal of non-normative sexualities. But why is this tool called “pride” in the first place, and why do we celebrate it in June?

The answer to both these questions lies in a land far away. In the United States, “pride” month is celebrated in June to mark the anniversary of the Stonewall Inn riots in which gay people finally stood up to the police and refused to be arrested for their sexual orientation. This June 1969 act of resistance continues to be commemorated there in the form of “Pride” month.

So why do we in India celebrate “Pride” and celebrate it in June? Partly, of course, because America is the aspirational land of “liberty” – an idea that the Americans themselves have assiduously fostered for over a century. And partly because “we” – those of us in Anglophone communities who know what the Americans are up to – have committedly taken on their vocabulary of pride and shame.

With this wholehearted embrace, we continue to prove ourselves good colonial subjects who take on the morality of the master race even when it has very little to do with us. After all, we embraced the idea of sexual “shame” when the Biblical British introduced the idea to us two hundred and fifty years ago. The idea of sexual “shame” is relatively new in the Indian subcontinent, and we in fact have far longer and far older histories of what may now be termed “pride.”

We have 12th century temples that proudly showcase multiple sexual positions. We have 13th century poetry that stunningly encapsulates male-male desire. We have 18th century art that shamelessly paints cross-dressing lovers. We have the largest corpus of male homoerotic poetry in the world. We have calendar art that foregrounds sexually brazen gods. We have long histories of multiply-gendered, multiply-sexual, multiply-identifying people, long before trans* became a trend.

What Indic cultures historically complicate are languages of binary distinctions. The Kamasutra suggests there are at least three different genders. And Bullhe Shah suggests that men in love wear burqas. To this day, we have men who have sex with men but who do not consider themselves gay, and might never even have heard of the term, let alone associate shame or pride with their activities.

Why don’t we celebrate that instead of choosing to celebrate, in June, the American notion of “Pride”?

(Prof. Madhavi Menon is the Director of Centre for Studies in Gender & Sexuality at Ashoka University)

A dome of Denominator Thinking