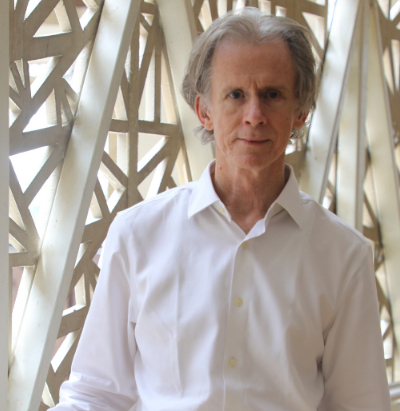 Justin McCarthy is a dancer, musician, instructor and choreographer. He started learning the piano at age 5 under Ruth Kuipers and later learnt from Heather Halsted before studying with Louis Nagel at the University of Michigan and Mack McCray at the San Francisco Conservatory of Music. He also worked extensively with Ruth Liebich.

McCarthy’s studies in Bharatanatyam began at The Way of the Dance School in Berkeley, California with Lesandre Ayrey and Mimi Janislawski.  Coming to India, he initially studied with Subbaraya Pillai (an exponent of the Pandanallur style of bharatanatyam) in Chennai and subsequently with Leela Samson (an exponent of the Kalakshetra style of bharatanatyam) at the Shriram Bharatiya Kala Kendra in New Delhi.  He also studied Sanskrit poetics and grammar with Gopal Krishna and carnatic music with Shyamala Sundaram.

McCarthy lives in New Delhi where he gives piano lessons and has taught Bharatanatyam at the Shriram Bharatiya Kala Kendra since 1990. He has performed extensively as a soloist in bharatanatyam and has choreographed many ensemble works in which he has appeared alongside dancers trained by him at the Shriram Bharatiya Kala Kendra. His first choreography, Maduraikanchi, was premiered in Delhi in 1993. This has been followed by many others, including Abhigyanashakuntalam (1997), Of Longing, Matter and Divinity (2005), Rajavilaasam (2009), Lokaalokam (2010), Naukacharitramu (2013) and Where the Streets are Fragrant with Sandal Paste… (2017), which was commissioned for the opening of the India International Centre’s annual festival of the arts, The IIC Experience. He has been with the performing arts department of Ashoka University since 2014.

As a musician, McCarthy has given many solo piano and harpsichord recitals as well as accompanied Delhi soprano Situ Singh-Buehler and the Neemrana Music Foundation Choir. He also played with many visiting musicians such as violinist Kerstin Linder-Dewan, cellist Dominique de Williencourt, soprano Dominique Moaty and harpsichordist Douglas Amrine.  He has appeared at both the piano and the harpsichord with Francoise Lasserre’s ensemble Akademia on their many visits to India.

In 2012, along with film director Sandhya Kumar, McCarthy made a national award-winning film on South Indian courtesans with a grant from India Foundation for the Arts.  The two are currently working on a film about rural musical theatre in Tamil Nadu with a grant from PSBT.  McCarthy received the Nartaka award for life-time achievement in bharatanatyam from Natyanjali Trust, Chennai in 2017.