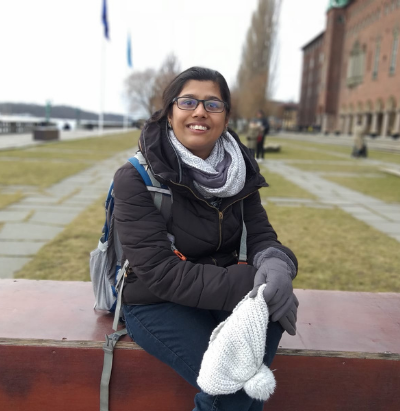 Susmita Saha will be working as an Experimental Physicist at Ashoka University. Her research topic is to study spinwave dynamics in various magnetic nanostructure and thin films. Magnonics is a new vibrant field of research where spin waves, which are the fundamental magnetic excitation in a metallic ferromagnetic material with frequencies in the microwave regime, propagate in a similar fashion to electromagnetic waves in a photonic crystal or acoustic waves in a phononic crystal. The wavelengths of magnons are orders of magnitude shorter than those of light waves operating at the same frequency range (i.e., at 20 GHz microwave has 3 cm in air, while the spin wave wavelength can be shorter than 100 nm), which makes magnonic crystals suitable candidates for nanoscale on chip microwave signal processing and nanomagnonic devices, including magnonic waveguides, filters, splitters, phase shifters, spin-wave emitters and logic elements.

She has completed her B.Sc and M.Sc from University of Calcutta, India. She has completed PhD from S. N. Bose National Center for Basic Science, India in 2016. After that she moved to ETH Zurich, Switzerland to pursue her first post-doctoral research. At this time, she has received ETH Zurich Post-Doctoral research fellowship award-2016, funded by ETH Zurich and Marie Curie Action people COFUND Program. In 2020, she had joined Uppsala University, Sweden to pursue her second post-doctoral research work. She has received Marie Skłodowska-Curie Actions Individual (MSCA) Fellowship to pursue 2 years of post- doctoral research work in Poland funded by European Union and SONATA research grant funded by a Polish research funding agency as a principal investigator. Unfortunately, she could not avail both of the grant as she will be joining at Ashoka in Jan 2022.