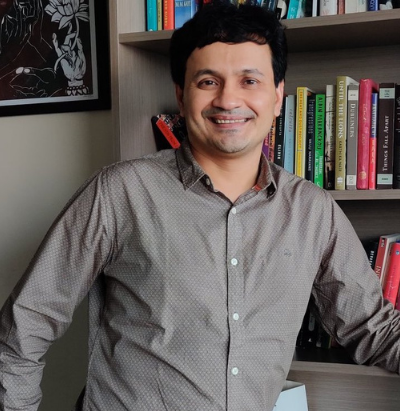 Saikat Majumdar is Professor of English and Creative Writing at Ashoka University. He has taught previously at Stanford University, and was a Fellow at the Newhouse Center for Humanities at Wellesley College. He is the author of Prose of the World: Modernism and the Banality of Empire (Honorable Mention, Modernist Studies Association Book Prize, 2014), a study of modern world literature in English, College (2018), a general nonfiction on liberal arts education in India, and the co-editor, with Aarthi Vadde, of a collection of essays, The Critic as Amateur (2019).

Saikat has published three novels, most recently, The Scent of God, a finalist for the Mathrubhumi Book of the Year Award, 2020, and one of Times of India’s “20 Most Talked About Indian Books of 2019”; The Firebird (published as Play House in the US), one of Telegraph’s Best Books of 2015 and a finalist at the Bangalore Literature Festival Fiction Prize and the Mumbai Film Festival Word-to-Screen Market, and Silverfish, 2007.

Saikat is a columnist for Outlook and the Los Angeles Review of Books, and writes for The Hindu, Telegraph, Times Higher Education, Hindustan Times, Indian Express, Scroll, Wire, Lit Hub, and other venues.

Saikat’s new novel, The Middle Finger, will be published in January 2022.

#AshokaBookTower – ‘The Scent of God’ – Written by Prof Saikat Majumdar, the book is a journey of friendship and love wrapped in a sensuous tapestry against the backdrop of a spiritual institution and published by Simon and Schuster India