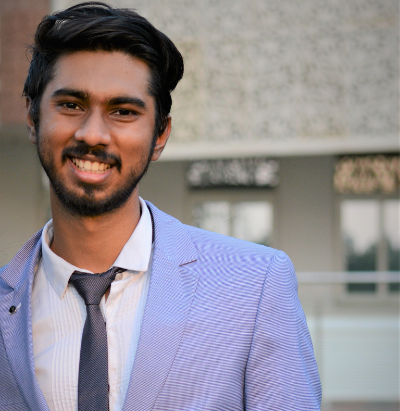 Sam hails from the very hospitable and welcoming city of Chennai where he has spent almost all of 21 years, loving all of it. He, during the course of his graduate studies in Journalism, developed an ardour for studies of human behavior, philosophical reasoning, theology, and theistic studies. These pursuits piqued him to academically follow the aforementioned, thus the Young India Fellowship.

Sam tries to educate himself on most imperative subjects under the sun, and tries to improve his comprehension of things and people around him, this has subtly sown a seed of sympathy for his surroundings. He also has developed biases of certain issues but his indifference towards the nature of the world and its proclivity to not stay the same rents his ideas to be challenged. And somehow the experiences of life, he says; turned him, a goofy extrovert into a gauche lummox, who coys away from social gatherings.

His biggest predicament of the current world oversees the daubing of despair and certainly pessimistic world view, he strongly believes that human efforts can make and have made the world; paralleling with the philosophy of meliorism. He hopes to accompany higher virtues and innocuously persuade his contemporaries to see things from his perspective.