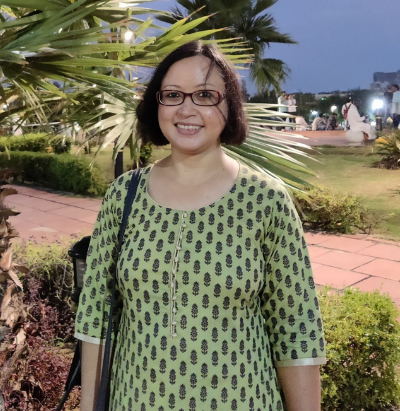 Swargajyoti Gohain is an Assistant Professor of Sociology and Anthropology. She has a Ph.D. in Anthropology from Emory University, U.S.A., and a Bachelors and Masters in Sociology from Delhi School of Economics, Delhi University. She has held postdoctoral positions in the International Institute for Asian Studies, Leiden, Netherlands, and the Institute of Economic Growth, Delhi. Before joining Ashoka University, she was an Assistant Professor in the Department of Humanities and Social Sciences, Indian Institute of Technology Kanpur.

Swargajyoti Gohain’s research interests include the anthropology of state and borders, culture and politics, development, infrastructure and ecology, and educational institutions in the Indian Himalayan region. She has fieldwork experience in Northeast India and the Himalaya. Her current project is a study of contemporary Tibetan Buddhist institutions and networks in India. She is also developing a research project on the relation between culture, politics, and ecology through the study of tourism infrastructure. Her work adopts an interdisciplinary approach in analysis, even while remaining grounded in the disciplines of sociology and anthropology.