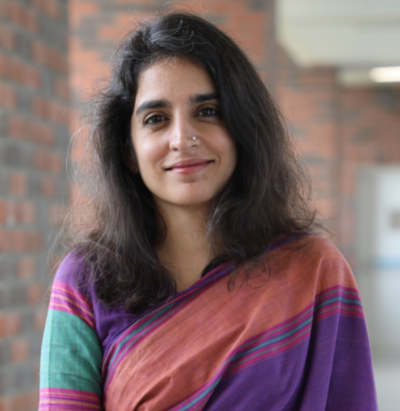 Mandakini Dubey is Assistant Professor of English at Ashoka University. Professor Dubey earned her Bachelor’s in English from Mount Holyoke College. She completed her Master’s at Duke, where she also earned her Ph.D (Victorian literature).

She has previously taught several courses in academic writing as well as in Victorian, Anglophone and Postcolonial literature, at Drew University (New Jersey) and later, the Indian Institute of Technology, Delhi.

Professor Dubey has publications in literary and general interest magazines. She is currently working on a book project (as yet untitled) that examines the cultural life of 19th century orientalist scholarship. It studies the ways in which disciplines like comparative religion and philology not only fed into Victorian esotericism, but were themselves enlivened by some of the same questions as occultists and spiritualists. Looking at a cross-section of novels, poems, translations, occultist texts, and scholarly writings, she will trace the emergence of new forms and formations—literary, cultural, philosophical and historical—from the heterogeneous and discordant encounter of esotericism and orientalism.