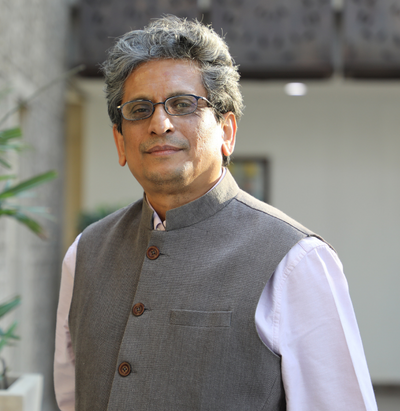 Somak Raychaudhury is Vice-Chancellor, Ashoka University. He was previously the Director of the Inter-University Centre for Astronomy and Astrophysics (IUCAA), Pune.

Professor Raychaudhury graduated from Presidency College, University of Calcutta, and went on to read Physics at Trinity College, University of Oxford, supported by an Inlaks Shivdasani scholarship. He did his Ph.D. in Astrophysics at the University of Cambridge, supported by the Isaac Newton Studentship, where he was awarded a J T Knight prize. He then moved to the Harvard-Smithsonian Center for Astrophysics, (CfA) at Cambridge, USA, as a Smithsonian Fellow. He stayed on to work in the High Energy Astrophysics division of the CfA, working for a NASA project, as part of the team that built the Chandra X-Ray Observatory, now in orbit. At this time, he was always a Fellow of Lowell House, Harvard University.

Professor Raychaudhury worked at IUCAA Pune as an Assistant Professor for a few years in the 1990s before moving to the University of Birmingham, UK, where he taught at the School of Physics and Astronomy for more than a decade. He moved back to India in 2012, to help rebuild Presidency College, Kolkata, into Presidency University, where he was Dean of Science and Professor and Head of Physics, till he moved to Pune in September 2015 as the fourth Director of IUCAA, which is one of the top research institutions in Astrophysics in the world.

His work involves a wide range of topics in Cosmology and Astrophysics and has made seminal discoveries using observations at radio, optical and X-ray frequencies, from the ground and from Space. He has worked on exotic stars such as black holes and neutron stars in nearby galaxies, including our own galaxy, the Milky Way. He has worked on observational cosmology, in determining the scale and age of the Universe. He pioneered the study of galaxy superclusters as the largest structures in the Universe and has discovered some of the largest structures of galaxies in the Universe, including the “Saraswati” supercluster of galaxies. In the recent past, he has been in leading positions in several of India’s mega-science international projects, including the Thirty Meter Telescope and LIGO-India. He has developed innovative machine-learning algorithms for mining large astronomical datasets, and recently co-chaired the committee to compile the Vision document for the Government of India, for the next decade of Astronomy research.