Track Changes is a bi-monthly webinar series organized by the Undergraduate Writing Programme. Through these conversations, instructors from the UWP explore areas at the intersection of Art, Theory, Praxis, Culture, Science and Technology, with experts in various fields. Each month, one of the webinar sessions is dedicated to issues surrounding the craft and process of writing, while the other session engages with issues related to critical thinking more broadly. Conceiving of writing as an inherently dialogic process, Track Changes seeks to offer a regular avenue for dialogue and thought, through stimulating conversations with diverse interlocutors including writers, artists, journalists, academics, activists, and researchers in various fields. The conversations at Track Changes are variegated. Here are some of the webinars we have organized: The Future of Publishing in India with Ananth Padmanabhan, CEO of HarperCollins India and Udayan Mitra, their Literary Division publisher. Writing Public Health: A Journalist’s Perspective with Anoo Bhuyan, the healthcare reporter at IndiaSpend.  Writing the Past: Narratives of Feminist Resistance with poet and writer Sharanya Manivannan, the award-winning author of five books, including the short story collection The High Priestess Never Marries and the novel The Queen of Jasmine Country.

Write to trackchanges@ashoka.edu.in to get involved in our events!

Chai, Crime and Cosy | Anuja Chauhan in Conversation with Devapriya Roy and the Students of Ashoka University 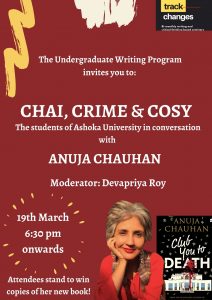 On 10th April 2021, the Undergraduate Writing Programme organized a Track Changes event entitled Chai, Crime & Cosy with best-selling author Anuja Chauhan. She was in conversation with Devapriya Roy and a few students about her new book Club You To Death, tropes in writing romance, portraying the life of fauji families and more.

Anuja Chauhan was born in Meerut Cantonment and educated in Meerut, Delhi and Melbourne. She has worked in advertising for over seventeen years and is credited with many popular campaigns including PepsiCo’s Yeh Dil Maange More, Mera Number Kab Aayega, Oye Bubbly and Darr ke Aage Jeet Hai. She is the author of four bestselling novels (The Zoya Factor, Battle for Bittora, Those Pricey Thakur Girls, The House That BJ Built), two of which have been optioned by major Bollywood studios and one of which has been made into a prime-time daily Hindi serial on &TV. 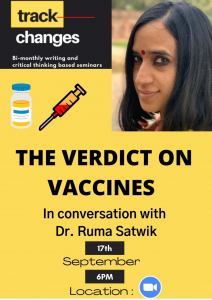 On 17th September 2021, the Undergraduate Writing Programme organized the first instalment of Track Changes, the Programme’s flagship speaker series. The event featured  Dr Ruma Satwik in conversation with  students of Ashoka University, moderated by Arpita Das and Devapriya Roy,  around the topics of critical thinking and methods in scientific research.

Dr Satwik is an acclaimed clinician and researcher, and is currently an Associate Professor at The Ganga Ram Institute for Postgraduate Medical Education & Research and a Consultant at the Centre of IVF and Human Reproduction, Sir Gangaram Hospital, New Delhi. She is also the Co-Convenor of the Special Interest Group in Research Methodology, Indian Fertility Society and a faculty member for the National Board of Examinations Fellowship in Reproductive Medicine. Her work has been published in leading peer reviewed journals in reproductive medicine, internal medicine and gynaecology.

Starting March 2021, she led a ground-breaking vaccine effectiveness study (unrelated to her clinical expertise but using methods that she was deeply familiar with) to answer one of the most important questions in public health today: the efficacy of the COVID19 vaccine. You can see coverage of this study here. 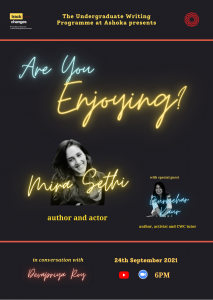 On 24th September 2021, The Undergraduate Writing Programme is organized the second instalment of Track Changes, our flagship speaker series. The event will feature Mira Sethi (actor, journalist, and most recently, the author of Are You Enjoying?) in conversation with Devapriya Roy (and special guest: author, activist and CWC tutor Gurmehar Kaur).

Mira Sethi is an actor and writer. She grew up in Lahore and attended Wellesley College, after which she went on to become a books editor at the Wall Street Journal, where she was also a Robert L. Bartley Fellow. In addition, she has also contributed to the New York Times, Vogue and the Guardian. Her collection of short stories entitled Are You Enjoying? present vignettes from life in urban Pakistan, and was published by Knopf earlier this year. In addition, Ms Sethi is also an acclaimed actor in Pakistani drama serials, having appeared in hit series such as Chupke Chupke and Mohabat Subh Ka Sitara Hai.

Gurmehar Kaur is the author of Small Acts of Freedom, a deeply personal family history published by Penguin Random House India in 2018. She is a social activist and an ambassador for Digital Peace now, a non-profit organization advocating for Cyber Peace. Kaur cofounded Citizens for Public Leadership (CPL), an independent nonpartisan movement focused on advocating for progressive public policy in India. In 2017, Kaur was listed by TIME magazine as a ‘Next Generation Leader’, a global listing of ten young men and women making a difference in the world. She graduated from Lady Shri Ram College in 2019 and holds a Masters in Modern South Asian Studies from University of Oxford. Her second book The Young and the Restless: Youth and Politics in India was published during the Lok Sabha elections in May 2019.

From Pitch to Publication: Research and Writing with Samanth Subramanian 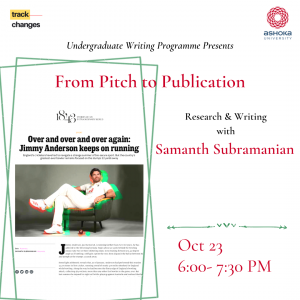 The Undergraduate Writing Programme hosted a session with journalist and author Samanth Subramanian on the 23rd of October at 6 PM. He was in conversation with Aditi Sriram about his writing process: how to come up with an idea, research it, refine it, and end with a published piece.

Subramanian has written three books and several articles, about everything from fish, to cricket, to COVID-19 masks, to the scientist JBS Haldane. You can browse them all here. In the session, we analyzed a recent profile he wrote about British fast bowler Jimmy Anderson, and the steps he takes to grow a 1-paragraph pitch into a 7,000 word article.

You can view the recording of the session here.

Crafting a Life: On Biographies with Jairam Ramesh 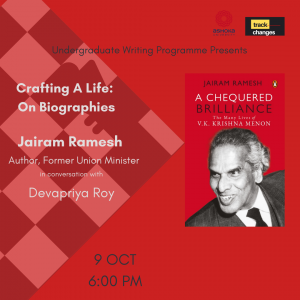 The Undergraduate Writing Programme hosted a session with author and Member of Parliament, Jairam Ramesh on the 9th of October at 6 PM. He was in conversation with our very own Dr Devapriya Roy, about his most recent book, the critically acclaimed biography of Krishna Menon, as well as about the art of conducting research and the craft of writing biographies. 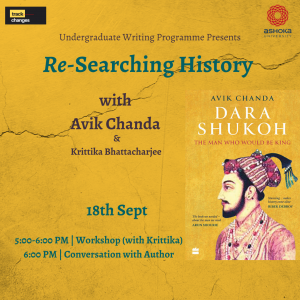 Avik Chanda is an author, columnist, business adviser and entrepreneur. His book, From Command To Empathy: Using EQ in the Age of Disruption (HarperCollins, 2017), was selected for Amazon India’s Best Reads under ‘Business, Strategy and Management’. His latest book, Dara Shukoh: The Man Who Would Be King (HarperCollins, 2019), has garnered wide praise from academics and authors, the press, and general readers, was featured in the Top 10 Non-Fiction National Bestsellers’ List for 10 weeks, and has recently been released as an audiobook, by Audible. 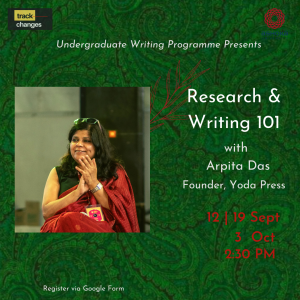 The Undergraduate Writing Programme organized a 3-day research and writing workshop by Arpita Das, founder of Yoda Press. The workshop was held on 12 and 19 September,  and 3 October, at 2:30 PM.

You can view the PPT from the first day of the workshop here, the second day here, and the final day here.