As a part of Orientation Week 2022, the OLS conducted a session titled ‘Inclusive Education at Play’ to generate awareness and sensitize students from the incoming undergraduate batch about the myriad diversities that surround us in terms of race, class, gender, disabilities and other markers of social identities. Led by Reena Gupta, Founding Director of the Office of Learning Support, Ashoka University, the interactive session contained activities and discussions that encouraged the students to reflect on the impact their identities have on their actions and experiences, value diversity and practice inclusion in their day-to-day lives. It also provoked them to challenge stereotypes related to disabilities and other markers of identity. The highlight of the session was the ‘Voices’ segment, in which students with disabilities at Ashoka and those who have worked with the office shared their experiences and messages with the new students. 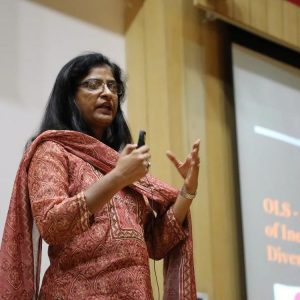 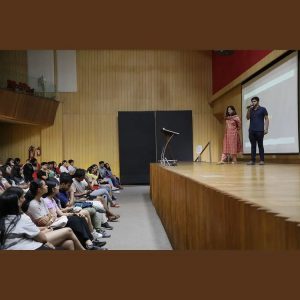 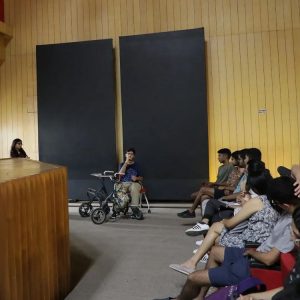 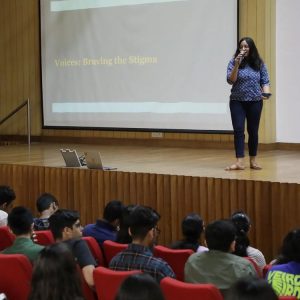 On August 5, 2022, the Office of Learning Support (OLS) at Ashoka University convened the first Summit on the inclusion of students with disabilities in higher education. The summit was a major milestone for the OLS as it initiated a much-needed deliberation around best inclusive practices, and helped spearhead collaboration with like-minded institutions that aspire to put inclusion at the forefront of their academic and campus activities. The idea was to create a plan and establish resource and support structures in higher education institutions (HEIs). The Summit also offered a useful platform to discuss avenues for research on accessibility and enhanced participation of qualifying students with disabilities at HEIs. 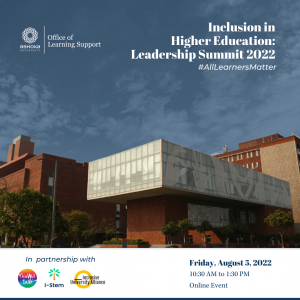 Eminent speakers and panelists delved into discussions on policies, solutions to major systemic and infrastructural barriers, research and technological advancements and the sharing of best inclusive practices and key learnings from various institutions already on this journey. Prof. Anil D. Sahasrabudhe, Chairman, All India Council for Technical Education (AICTE) was a keynote speaker at the summit. Speaking at the summit, he said, “Support system for students with disabilities is essential for India’s growth.” Dr Pankaj Mittal, Secretary General, Association of Indian Universities (AIU) also delivered a keynote address at the summit. This Summit was designed to be an event in which university leaders, policymakers, and other stakeholders connected and shared education models based on the concepts of accessibility and inclusion. The sessions touched upon the steps taken by the govt. and regulatory bodies; lived experiences of the students; a parent’s perspective; respective roles played by the faculty members, senior management, external support service providers, innovators, policy makers and awareness advocates. The summit also focused on the role of technology, corporates and society at large in addressing the challenges. Overall, it accelerated progress towards implementing inclusive practices across all HEIs and in workspaces in India. 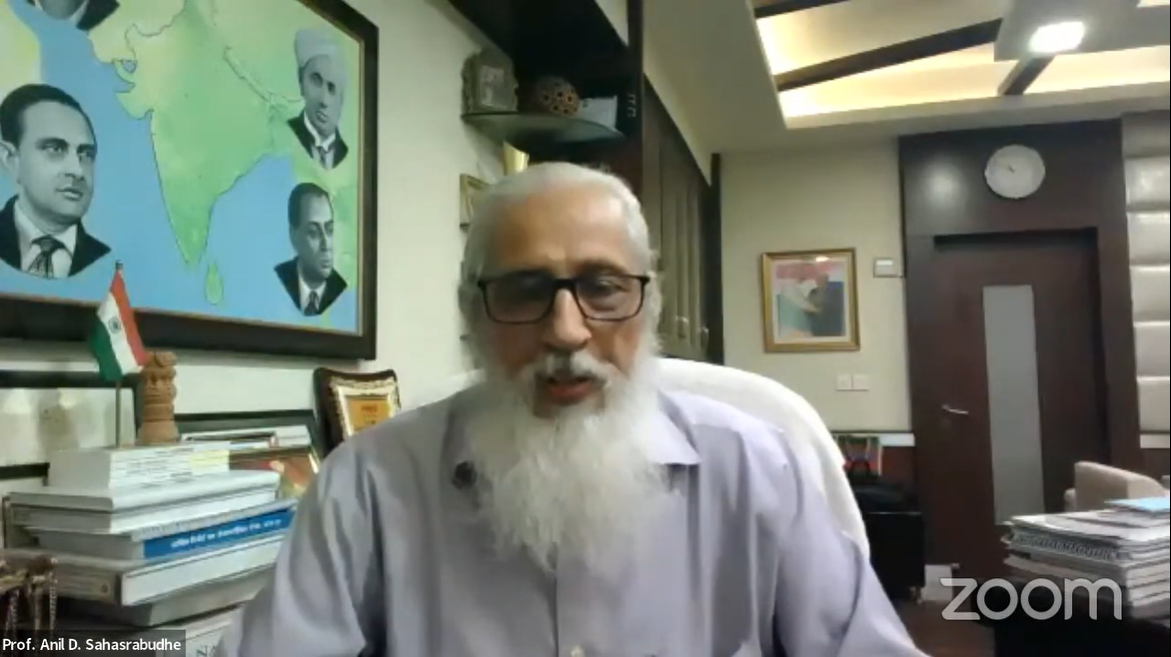 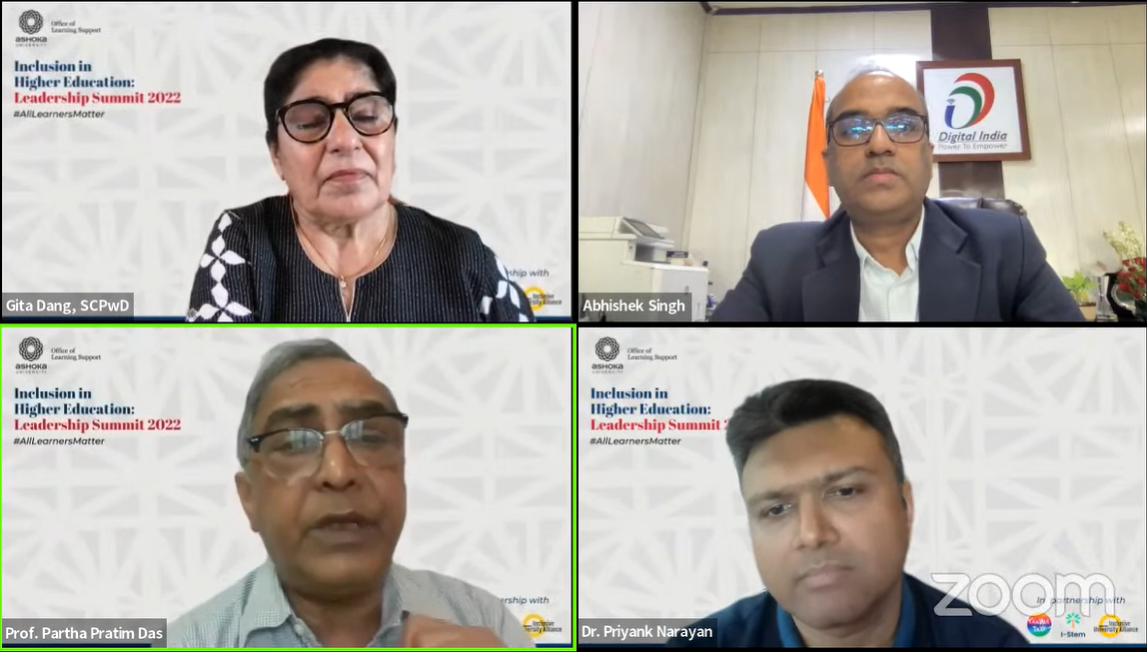 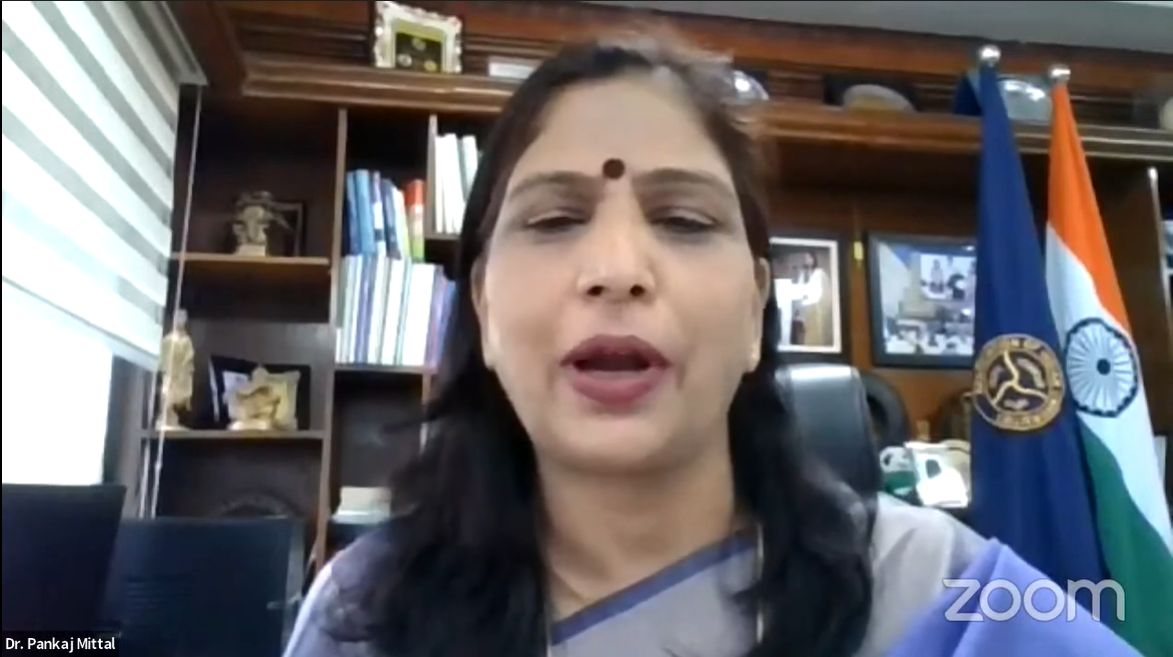 At the beginning of June 2022, the OLS returned with the third volume of its summer newsletter, Neurodiversity Initiative. The weekly newsletter was started two summers ago to raise awareness about neurodiversity and diverse learning conditions among the Ashoka community. The past two volumes of Neurodiversity Initiative spoke about pertinent topics that attempted to demystify and destigmatise neurodiversity and learning concerns. They helped us see disabilities in a new light by sharing stories of success, and highlighting not just the challenges, but also the
strengths of people with diverse learning conditions. The idea was also to encourage Ashokans to implement inclusive practices that make neurodiverse folks feel more at home. 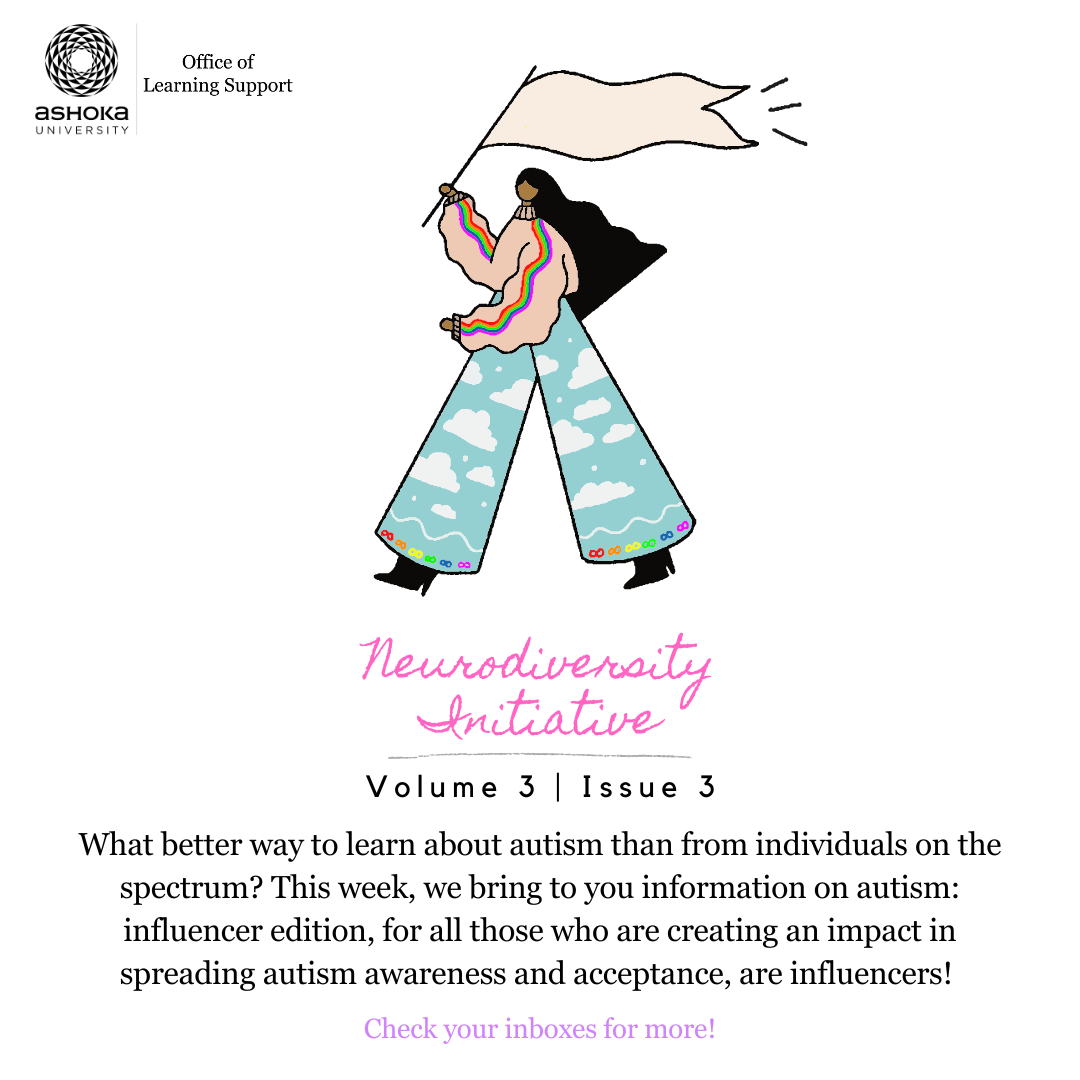 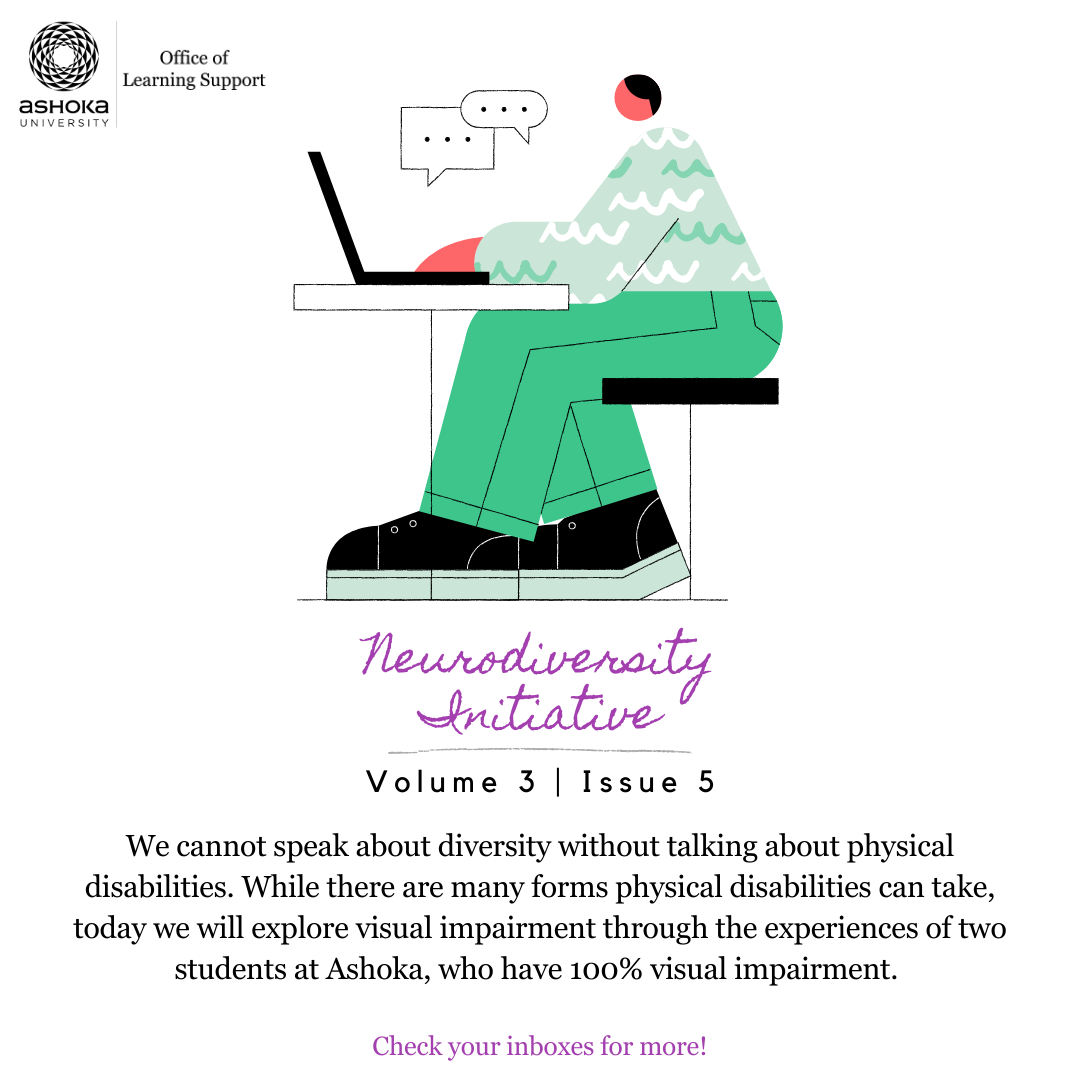 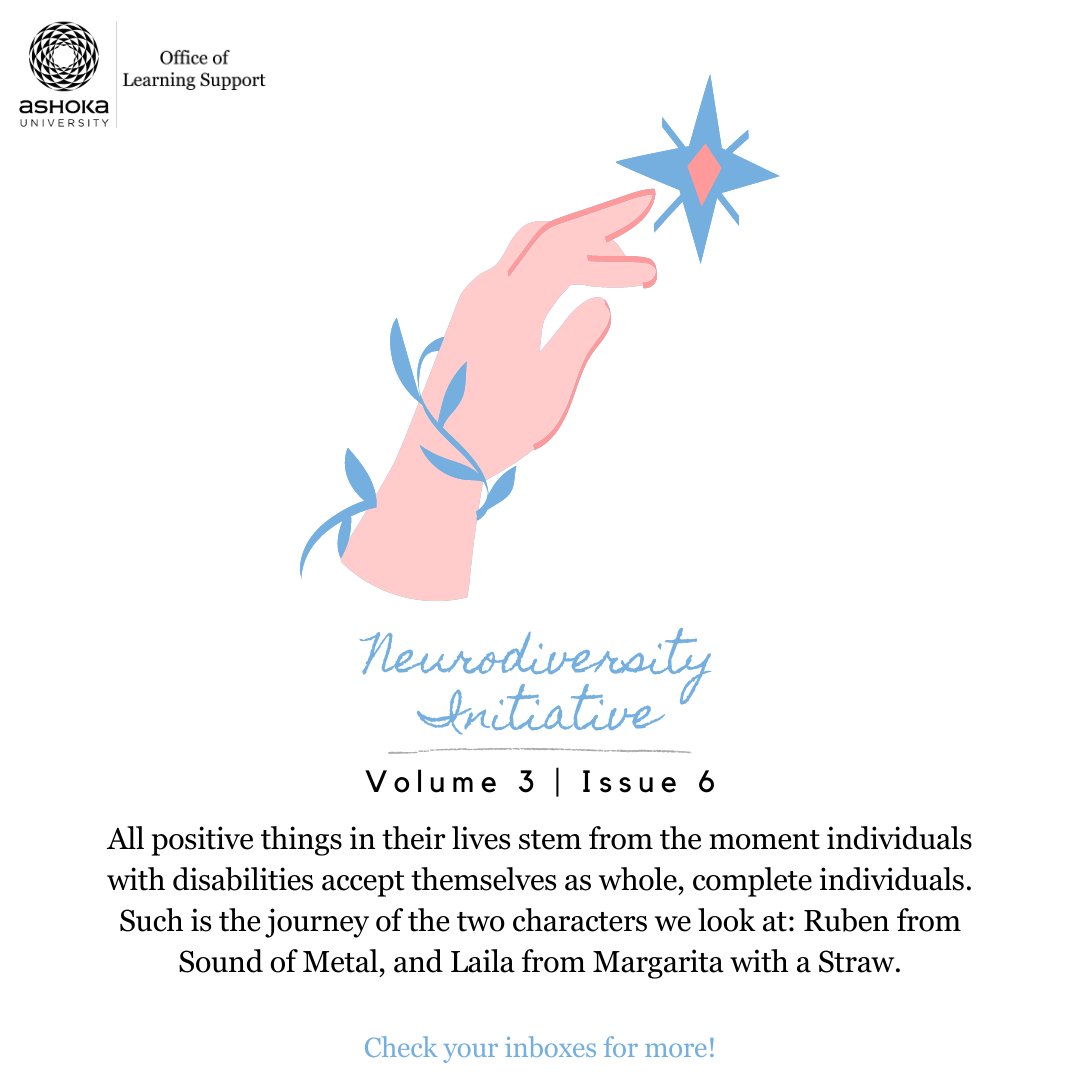 This time, the newsletter brought forth stories, lived experiences and perspectives of people who could lend us some first-hand insight into what living with a disability, and navigating it is like. Through these narratives, the OLS nudged the Ashoka community to become more acquainted with neurodiversity and disabilities, and the myriad ways in which they manifest in individuals.

Connecting with Differences: A Session with Ashoka Staff Members

Along with the Human Resources Team, the Office of Learning Support conducted a session titled, “Connecting with Differences: Inclusion at Workplace” on 20th May 2022 with the University staff members. The session was facilitated by Reena Gupta, Director, Office of Learning Support, and aimed to help the attendees reflect on their individual learning patterns, understand the diversity amongst team members and around them, and discuss the ways in which the staff members can contribute towards building an inclusive and nurturing work environment for everyone. This was the first time the office had engaged directly with the staff on this topic. The session was well-received, and acted as a platform to brainstorm solutions to make Ashoka a more inclusive and diverse workplace.

Read more about the session here.

Every year, April is observed as World Autism Awareness Month, with an aim to support the creation of fulfilling lives and relationships for persons with autism. This month also acts as a marker of the work that has been done so far, and the road that lies ahead of us in our pursuit of enabling the inclusion and acceptance of persons with autism in our university. To observe this month, the OLS planned a series of events and activities to promote and foster feelings of warmth and acceptance among the Ashoka community, specifically in the context of appreciating and accepting neurodiversity around us.

As a kickstart, the OLS put up posters across the campus listing a few ways in which we can extend a hand of friendship to our peers who are on the autism spectrum. The idea was to encourage the Ashoka community to pause for a moment and engage with the poster to understand and implement some of the inclusive practices highlighted through it, so as to make our neurodiverse peers feel more at home at Ashoka. 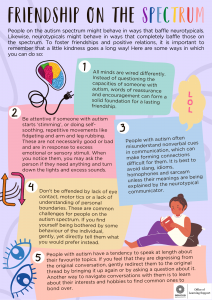 On April 12, the OLS had invited two organizations, Action for Autism (AFA) and Action for Ability Development and Inclusion (AADI), for the Spring Haat organized by the Student Life Office. Both the organizations set up their stalls, showcased the products made by people with autism and other disabilities, and engaged with various students, staff, and faculty at the stalls. Along with this, there was an interactive activity organized to explore the common understanding of autism amongst the Ashoka community members and put down questions that might have about it. The purpose was to initiate a conversation around autism and neurodiversity on the Ashoka campus. Later, the responses were collated, the Ashoka community was encouraged to reflect on their connotations, and common questions were addressed for the purpose of increasing awareness about autism. 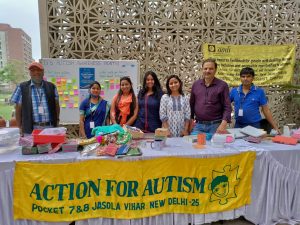 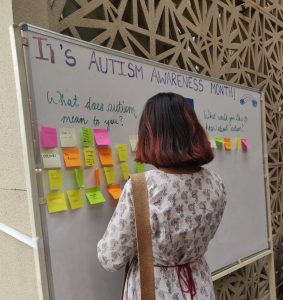 The OLS encourages those curious to learn more about autism or create inclusive spaces around themselves to reach out to the office, for the month may have drawn to a close, but the dialogue on autism must continue.

One of the greatest milestones for the OLS this year has been organising the first-ever conference on the inclusion of students with dyslexia in higher education institutions in India. The virtual conference aimed to spotlight dyslexia through lived experiences, explore its acceptance in HEIs in India and look at its future in the realm of employment. It brought together academicians, practitioners, industry experts, parents, students, advocates, and policymakers to share best practices, knowledge and lived experiences to enable effective support systems for students with dyslexia across the HEIs.The idea was that this would further facilitate employers and industry leaders to capture the talent of people with dyslexia and achieve greater organisational productivity.

The conference hosted lauded keynote speakers and panelists consisting of experts in the field, and leaders and representatives from academia and corporates in the US and India. One of the panels hosted adults with dyslexia who have made a significant mark in their chosen areas of work. Other discussions centred around setting up the systems in place to encourage students with dyslexia to complete their higher education journey with confidence and contribute creatively to the ever-changing workspace globally. The conference was well-received by the audience and successfully started a dialogue on dyslexia and higher education in the Indian context. It also put forth Ashoka University as an educational institute that holds inclusion of students with diverse learning needs as one of its core values. 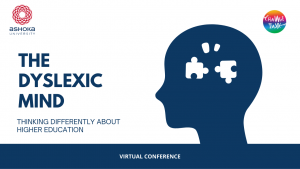 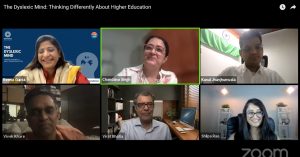 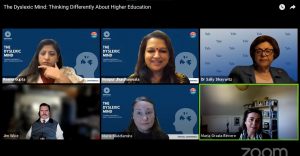 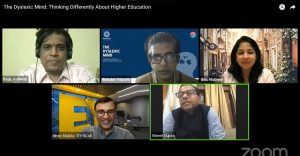 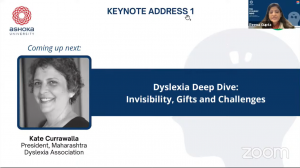 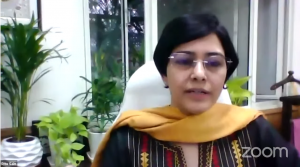 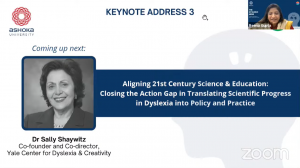 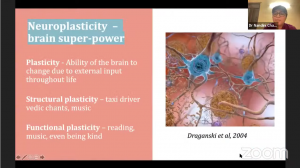 Click here to watch the livestream recording of the conference.

On account of the International Week of Deaf people, the OLS organized a workshop titled “HandSpeak: Demystifying Deaf Culture and Sign Language” on September 25, 2021. Led by disability experts and sign language trainers from V-Shesh Co, the workshop aimed at demystifying common myths associated with deaf culture and sign language through interactive exercises. At the same time, it provided participants with hands-on training on basic elements of the sign language used in everyday interactions, and employed fun and engaging ways to express emotions and body gestures using the nuances of sign language.

Ashoka staff members, students, and faculty joined the workshop and actively participated to learn more about sign language, deafness and the associated Indian context. The workshop made use of trivia, audience participation and a Q&A session to debunk common misconceptions and inform people about deafness, all of which was well-received by the participants.

As a part of Orientation Week 2020, the OLS conducted a webinar to create awareness and sensitize students from the incoming batch about various types of diversities in terms of race, class, gender, social identities around us. In doing so, we also introduced the concept of “Neurodiversity”, which aimed at creating awareness about various forms of cognitive, physical, and language diversities around us.

As a part of this webinar, we also invited a very special guest, Mr George Abraham, CEO, Score Foundation, and the founding chairman of the World Blind Cricket Council. He narrated his inspiring life journey and talked about what it was like for him as a person with 100% blindness to navigate his undergraduate journey at St. Stephens College, University of Delhi. He also provided certain practical insights into what all of us can do at an individual level to embrace all forms of diversities around us.

October 8th is observed as World Sight Day every year. 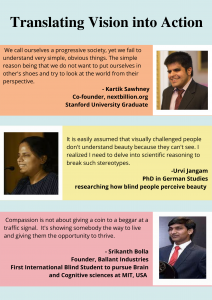 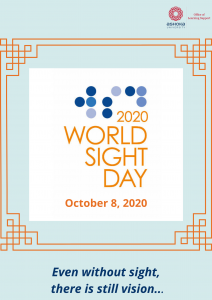 The month of October is observed as Dyslexia Awareness Month every year. On account of this, the OLS presented a Student Speaker Series, where Ashoka students with Dyslexia came forward and provided profound insights into their own experiences while navigating their academic journeys at Ashoka. 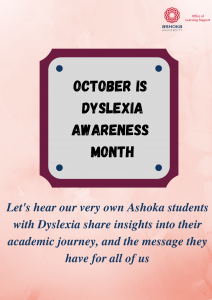 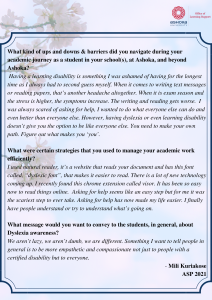 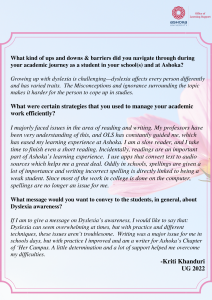 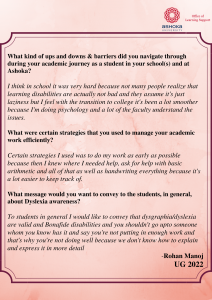 With the entire week (Sept 21 -25) being celebrated as the International Week of Deaf Awareness, the OLS organized an interactive session on demystifying deafness through understanding the deaf culture and sign language. P Rajasekharan, co-founder of V-shesh, along with his team members, taught simple signs used in everyday conversations, fun and engaging ways to tell a story using sign language, and much more. This introductory session on sign language was well received by the students and staff at Ashoka.

As a liberal space that values each individual as a significant entity in enriching the educational experience on campus, inclusivity and diversity are significant values of the Ashokan ethos. The human brain is a fascinating entity and Ashoka is a space shared by people with diverse minds. It is now time to value each mind – for all minds matter.

During Summer 2020 and 2021, the Office of Learning Support, along with a team of interns, launched the “NeuroDiversity Initiative”. As a part of this initiative, a series of newsletters were prepared to create awareness about the diverse minds that encompass our Ashoka community.